For the Love of Long Shots: A Memoir on Democracy is about Shawn’s experience with the Unique People’s Voting Project in the 1990s. They registered over 100,000 voters. 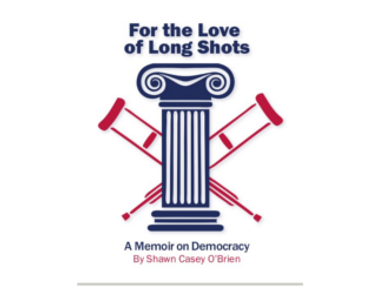 What would happen if 40 million cripples organized their vote and took real political power in America?

Shawn Casey O’Brien’s For The Love Of Long Shots looks at the offbeat, humane possibilities of such a phenomenon as a rag tag group of disabled rebels lay the groundwork for just such a bloodless, democratic revolution…all the while bringing in their pot crops, making love to beautifully broken women, and ultimately proving that miracles really do happen when they all come together on a back lot at CBS Studios to cast the first 1000 votes of the 1996 Presidential election by utilizing their all powerful Mail-In Ballots — in spite of the fact that they forgot to bring the postage stamps!

Throw in chained-off handicapped parking spots and bathrooms willfully made inaccessible all along the world famous Boardwalk of Venice Beach, CA, as well as bonehead attorneys who blow off their star witness, the Assistant Attorney General in charge of Civil Rights, thereby losing the “unlosable case,” and Long Shots amply demonstrates what most disabled citizens already know — no one really gives a damn about their rights, except them.  So they did something very American about it.

They began to organize their vote.